Learning on the Road – Gettysburg

If you find yourself on the East Coast and driving through Pennsylvania, check out Gettysburg. As a continuation of the Summer Series – ‘Learning on the Road’, Gettysburg is worth mentioning. Gettysburg, and many of the historical sites on the East Coast, have tons of things that you and your family can do for free while learning a lot about the history of our country.

Always start in the Visitor Center. It will give you maps, detailed information about the area, what battles were fought where, important people to know, times for the tours, reenactment opportunities and more! I try to steer my kids around gift shops but the Gettysburg Visitors Center does have a great bookstore. We did end up getting some amazing resources for our home library that would have been hard to find elsewhere.

For kids 5 – 13, there are reenactments they can participate in for free. Just sign up in the Visitor Center. Your child will be enlisted in the Union Army. They will learn what it meant to be a soldier during the Civil War. My friend did this with her kids and they had a lot of fun. For a full schedule of free activities, click here. My kids were too little at the time to participate in the reenactment, but we sure enjoyed walking the trail to the memorial battle field and checking out the monuments. 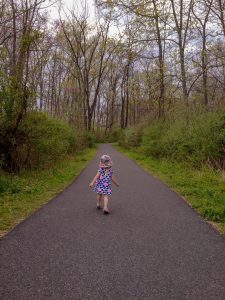 The first structure we saw was a small field hospital – it was just off the road and the beginning of Picket’s Charge. On July 1, 1863,General Robert E. Lee pit his 70,000 man Confederate Army at Gettysburg against General George G. Meade’s Union Army of the Potomac of 93,000 men. For two days the army’s battled fiercely, and for a brief moment, it seemed Lee would prevail. July 3, Lee ordered an attack by fewer than 15,000 troops on the enemy’s center at Cemetery Ridge. The assault, known as “Pickett’s Charge,” managed to pierce the Union lines but eventually failed, at the cost of thousands of rebel casualties, and Lee was forced to withdraw his battered army toward Virginia on July 4. This battle proved to be a turning point in the Civil War.

My son enjoyed climbing on the posts, an innocent with no concept of the violence of the fighting in this spot. I however, have a very active imagination and could easily visualize the screaming of the men in battle and those injured, the repetitive sound of shot after shot, the not-so-distant sound of the boom of the cannons, the whistle of the cannonball as it came flying through the air – smashing through man, wagon, horse and anything else in its path.I could imagine the smoke in the air, and the frantic panic the men must have felt as they struggled to reload their muskets in the chaos, praying that in this moment of vulnerability they weren’t shot themselves. 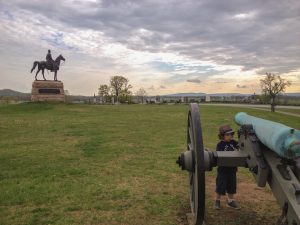 The Gettysburg Military Park has monuments memorializing the different companies that fought during the battle. Probably the most impressive is the massive Pennsylvania Monument. Pennsylvania provided 323,000 men to the Union Army, the second largest total of any state. More than 23, 400 Pennsylvanians took part in the battle at Gettysburg, making up a forth of the Union Army of the Potomac. 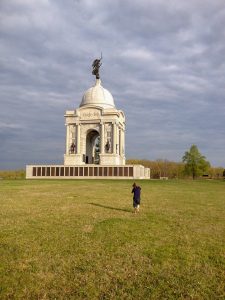 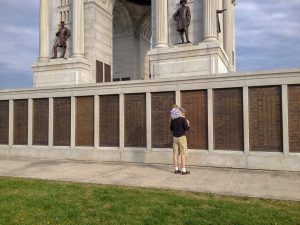 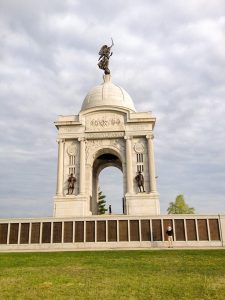 My older son had just joined the Army and was in boot camp when we visited Gettysburg. I was excited to find this monument to the United States Regular Army.

Gettysburg is an amazing place to visit for any history buff and a must I think for every homeschooler at some point in their learning about the history of the United States. We spent an entire afternoon walking the field between the different monuments and learning about the different companies. At the time, my children were too young to fully grasp the gravity of events happening at Gettysburg, but I am so grateful we have the books, the memories and photos of our visit. Now, my youngest is old enough to start learning about our Civil War and I have great resources to pull out!

One thought on “Learning on the Road – Gettysburg”