Learning on the Road
Up Close & Personal with the Oregon Trail 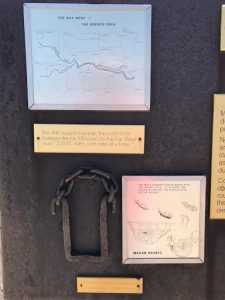 Living in an RV full-time has lent itself to some amazing free experiential learning opportunities for my homeschooler son. We got to spend some time off-season in Ogallala, NE. Most people are familiar with the region for the amazing Lake McConaughy recreation area, and we did visit the lake often, as well as the amazing education center that provides information about the dam that created the lake and the unique engineering that went into it. But we stumbled upon something unexpected while we were there, Ash Hollow.

A bit of history; the Oregon Trail origin point was Independence, Missouri and stretched across the US to Oregon City, OR. The trail was originally heavily used by trappers and missionaries but with the Oregon Land Claim Act of 1850, families left all they knew to head west for the vision of their own farmstead. Each settler could claim 320 acres of land, and married couples could claim 640 acres of land with the provision that they would have to live on their staked property for four years before their claim was finalized. Of course, this said nothing about the indigenous people who already lived there. People set out full of hopes and dreams, and got to their destination through sheer determination, grit and a lot of luck!

Ash Hollow, NE was The first major stop along the route, famous for its clean water, plentiful wood and grass for the stock. My son and I accidentally discovered it after a conversation with the RV park manager where we were staying. ”Oh yah, if you like history go look for Ash Hollow!” she said and gave us a vague direction to follow. We searched a local map and headed out. What we found exceeded all our wildest expectations!

An inconspicuous driveway off US Hwy-26 is all that you will see. You drive in to the parking lot and see Windlass Hill in front of you. Up till now, the travelers on the Oregon Trail had a fairly flat route. Windlass Hill and the entry into Ash Hollow was their first real vertical challenge of the trip. As my son and I stood on the top of the hill looking down, we saw a hill that could be walked. Of course, this is without heavy loads, or a big wagon. Knowing what would come ahead on the settlers journey, I could only imagine what they thought when they saw the real 14,000’ mountain ranges looming ahead of them on their journey West. This little hill was nothing in comparison! Windlass Hill has a 25° slope of 300’. The impression it made on the settlers was profound. The wagons had to be unloaded and the women and children carried the precious cargo up the hill item-by-item. Then the men pulled the oxen who were pulling the empty wagon up the hill. Even though the hill is now called Windlass Hill, the local signs say windlasses were NOT used to lower the wagons down, at least not at first. The name of the hill came later. Instead, the teams had to be carefully managed down the hill, and all the possessions and stores carried down and repacked into the wagon. 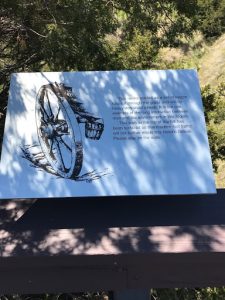 Wheel ruts can be seen carved into the landscape from the thousands of wagons that came through. In one instance, a gully was formed by the sheer number of wagons crossing the plain! Xander and I stood on the bridge that spans this gully and tried to imagine the thousands of wagon wheels that had to have come through here to have carved this gully into the landscape.

At the top of Windlass Hill, we could see the wagon wheel ruts etched into the landscape heading West. It looked like there were about half a dozen popular paths as those are a bit more defined than others. I was telling my son (he was 7 at that time) that at 7, he would be working, and walking alongside the wagon. No cushy ride West for him! I tried describing the day-to-day life as they struggled towards their new home. Of course, in this digital age, he couldn’t really conceive that kind of existence. Or the hard work for that matter, he has no comparison to base it on! 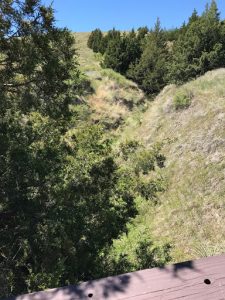 Chores just aren’t the same. We talked about the excitement these people must have felt. The terror and the thrill! We read about the different types of wagons that took this trail and why each was used, and then picked which one we would want to use! We read about the necessary supplies that were packed, and how critical it was to ration everything! We brainstormed about what special item we would try to bring with us. Ash Hollow turned out to be an incredible teaching moment, and quite the adventure into the wilds of Nebraska!

There is another area of Ash Hollow you can drive to. It’s down the road with a visitors center and a cave with information about the local geology. It was closed when we were there but we still got to walk around and see the old school house that was part of the park. It just goes to show, no matter where you are, there is always an opportunity for learning! And most times, it’s free! 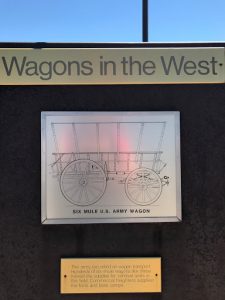 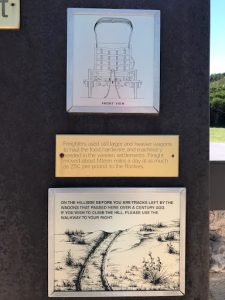 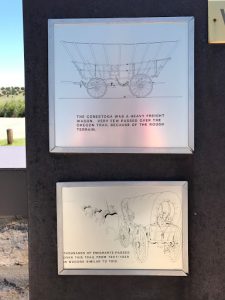 One thought on “Learning on the Road – Ash Hollow”